I've been typing for a little while.

I imagine that most people have been typing for a little while.

Born in 1994, I didn't regularly use a computer until the age of 11. I'd say that my behavior on the keyboard was not completely typical, compared to others my age. I noticed that in order to be listened to on forums, I had to type properly, using full words and capital letters. If I ever used lazy forms such as "u r" and "l8 bro gtg", then it mustn't have been for long. I instead opted to take a large speed hit so that I could type properly.

Of course, I wasn't perfect. My grammar and spelling were imperfect, as they are now. Well, maybe I've improved a little. My speed went up rather quickly. People on MSN often asked me why I added periods to the end of my messages. They didn't quite get it. To be honest, though, I didn't quite get it. It just felt good.

I remember getting my first mobile phone, an LG touchscreen phone with a slide-out keyboard. Again, all text messages had full words and proper punctuation. It was an odd obsession of mine.

One day, I was looking at the Das Keyboard online, and the blank keycaps really appealed to me on an aesthetic level, though I didn't quite touch type. I decided that I should remove the lettering from my Dell keyboard. I Google'd around on how to remove lettering, and decided that I didn't really have the resources necessary to properly make my keys blank, so I just grabbed some sandpaper and brought the keyboard to school. On lunch breaks for a few days, I just sat in a corner, removing keys, sanding their lettering, and placing them back on the board. I noticed difficulty in keyboard shortcuts, like Ctrl+J for downloads in Firefox. The awkwardness lasted less than a week after sanding the board, at which point I could finally touch type comfortably and hit most shortcuts without counting keys.

Oh, I had decided to memorize the QWERTY layout, and to do that I filled dozens of pages in my French-Religion class textbook with the layout, in varying sizes. I still sometimes dictate it when bored:

Altogether, I was happy with everything. I had my make-shift blank keyboard with unevenly sanded keys, and I could touch-type the QWERTY layout at about 95WPM. See this chart of about 70 races from TypeRacer at the time: 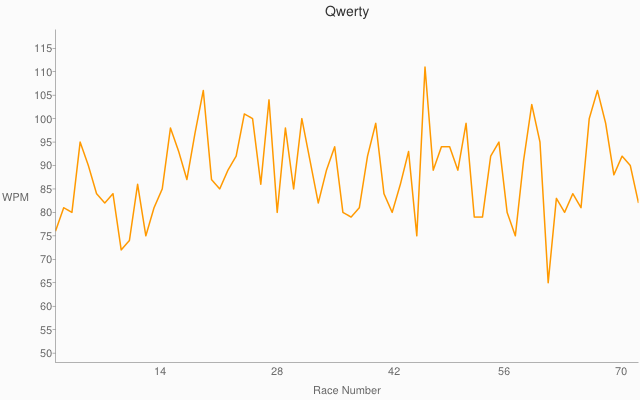 One day I was reading an XKCD Comic where the Dvorak keyboard layout is mentioned. After some research, I decided that Dvorak sounded really nice. I can't find the site I used to learn Dvorak, it may have gone down. I also remember the DVZine being a great inspiration to switch.

Learning the keyboard took a while, about a week to learn the layout, and longer to become at all proficient in typing it. I also had a pretty nice indication of progress on TypeRacer, which I started using after hitting about the 25WPM point with Dvorak.

I really did love Dvorak. This is evident as I used it exclusively for about two years. See my over 2500 TypeRacer races showing my progress: 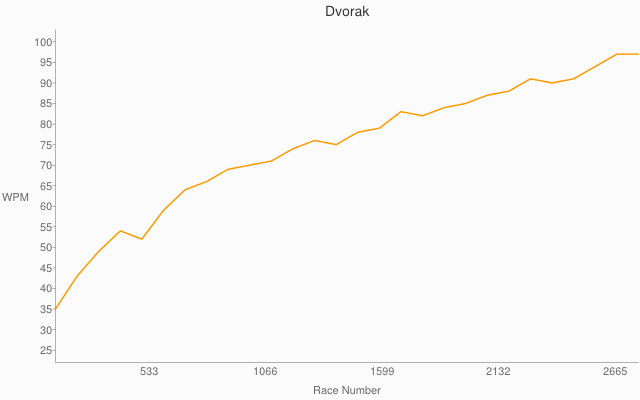 Dvorak did a lot of things right, making it a much more comfortable layout than Qwerty. That being said, the speed difference wasn't great compared to Qwerty, but the comfort and accuracy were. I could type Dvorak for hours on end without any discomfort, with high accuracy. Of course, this may be due to the fact that I never "properly" typed on the Qwerty layout. I tended to hold my right hand one column to the right, so that my pinky always rested on the shift key. Being left-handed, my left-hand didn't mind the extra responsibility.

Notice a dip in the chart, around the 500 race mark. This marked the purchase of my first ergonomic keyboard, the TypeMatrix 2030:

It had Dvorak markings, which I proudly displayed and used to confuse my high-school friends. I actually bothered to bring the keyboard to school.

As I said, I typed Dvorak for around 2 years. It never did me wrong, and a lot of its problems, like Ctrl+Q,Z,C,V, and B being inconvenient, didn't really bother me. Luckily the TypeMatrix helped ease the shortcut issues, namely by offering cut, copy, and paste as function keys.

Then I met Colemak. I read about its various supposed improvements over Dvorak, boasting its similarity to Qwerty. I was beginning to get frustrated with the Dvorak layout, especially as I was becoming more active in programming.

I decided, then, to abandon Dvorak, to switch to Colemak. People recommended Colemak over Dvorak all over the web. "It's more modern", "Computer-aided as opposed to book-written", etc. I felt obligated to switch. I managed to learn the Colemak layout a lot quicker than Dvorak, in only 3 or 4 days, as opposed to a full week. That being said, in my year and half with Colemak, I never quite experienced the same thrills that I had with Dvorak. Notice my less-than-enthusiastic participation on TypeRacer with this layout: 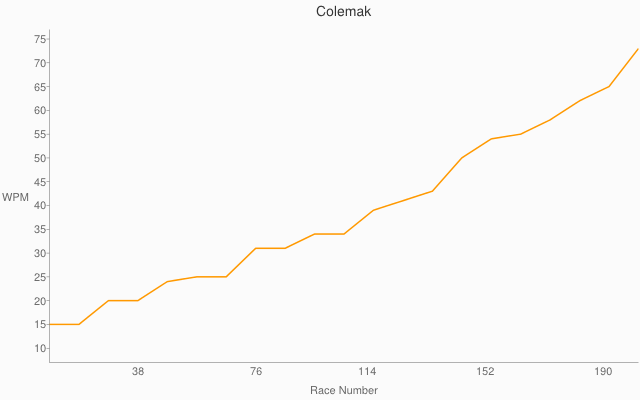 I stopped playing on TypeRacer after only 207 races. Rest assured that my speed did continue to increase, until I hit my Qwerty-equivalent 95WPM average.

I had one major gripe with Colemak, though: lateral finger movement. Basically, on Colemak, they put D and H on the home row. These letters are not uncommon, and using them requires lateral finger movement, which I tend to dislike. I especially hated H's position, as H is used in combination with many other letters. I like rolling, but found that to be a particularly painful flaw for my style of typing. This brought me to learn about Workman. Workman seemed to address the issues I had with Colemak, and so I instantly decided to give it a try. Much to my disappointment, though, I found typing to be an unpleasant experience. Something about the layout felt "off" to my hands, and I can't quite describe it. Obviously the feeling is subjective, but by the time I hit 30WPM, I didn't want to type in Workman anymore: 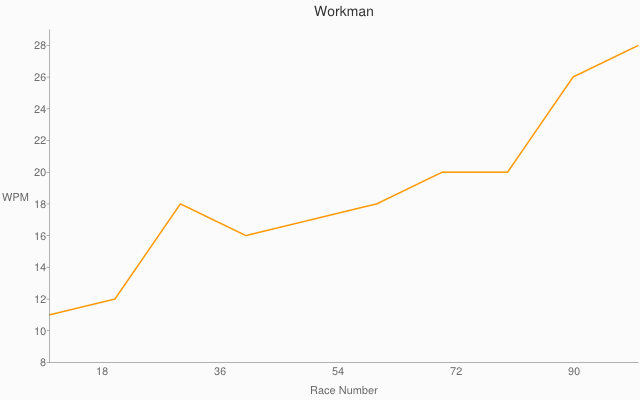 So don't worry, we're only due for one more switch. Paying attention to the download page for the Workman layout, I noticed that it was hosted by David Norman, inventor of the Norman layout. Norman saw flaws in the Workman layout and so made his own using similar principles. To me, it really seemed to hit all the points I was worrying about.

Similarity to Qwerty, for the sake of keyboard shortcuts (and learning, but I personally don't care about this), H on the homerow (at the time of learning, H and R were switched, but the middle finger is still very convenient to go up a row), minimized lateral finger movement, and a love for testing and statistics.

Norman was the quickest-learnt layout. It only took me a couple hours to memorize the layout, a couple days to reach TypeRacer-appropriate speeds. Since that week, I've been typing Norman, again almost 2 years now. It's by far the most enjoyable keyboard layout I've used, similar to Dvorak in terms of how much I enjoy it. You can see my speed on TypeRacer here: 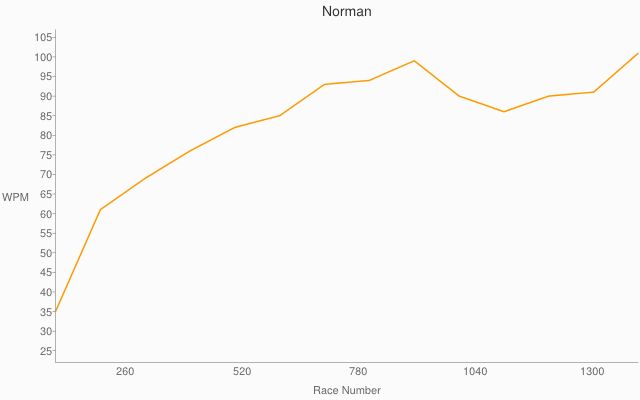 Notice a dip around the 900 race mark. It was at this point that I decided to focus more on accuracy, and also around the time that I received my second ergonomic keyboard, the ErgoDox.

The ErgoDox meant a big change, moving away from my trusted TypeMatrix. It features advantages, such as being mechanical, programmable, and split. Not to mention it also has two thumb-islands with 6 keys apiece.

My ErgoDox has Cherry MX Clear switches, and is obviously programmed to type in the Norman keyboard layout. I find the combination very comfortable. I have used the thumb-keys to reduce my pinky usage, thus reducing fatigue.

I also now type at an average of 100WPM, which is slightly higher than my original Qwerty speed, all those years ago. I can still type Qwerty, of course, but Norman provides accuracy and comfort that Qwerty just can't match.

Here are some pictures of the ErgoDox: 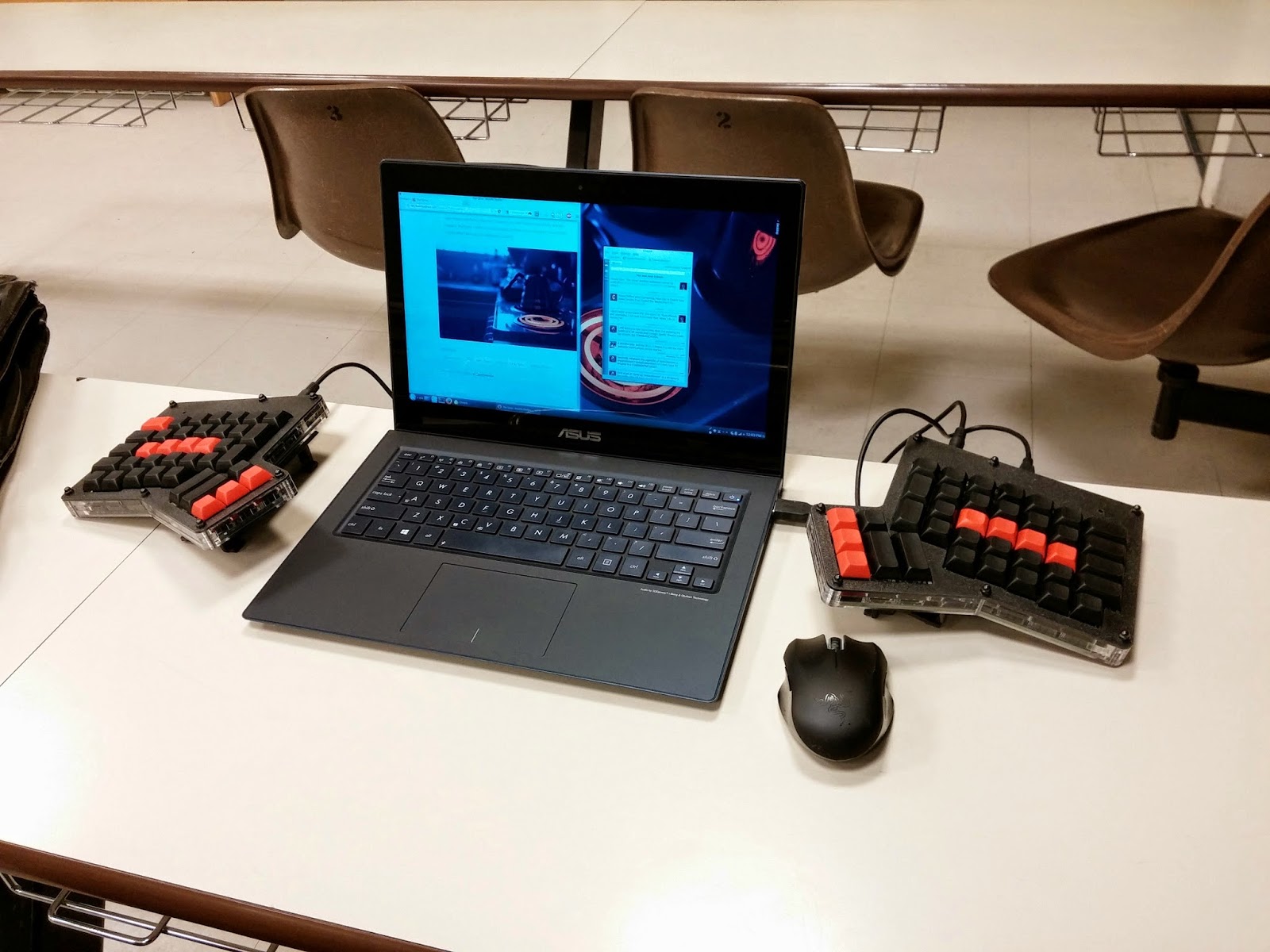 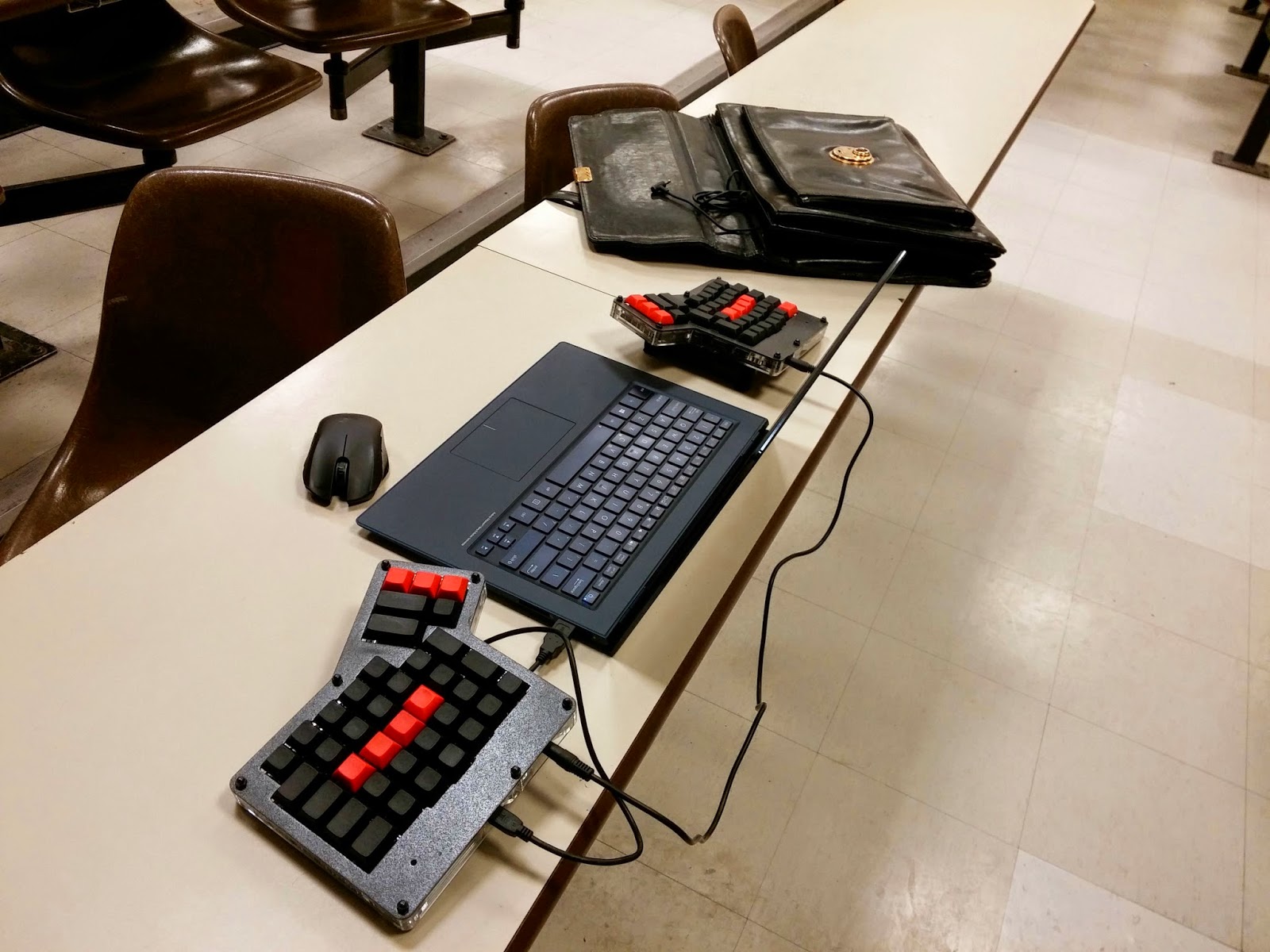 You can see more pictures on this Imgur album.

All this to say: I very much enjoy typing. I find myself typing every day as I'm actively programming, emailing, and redditing. Typing is exciting, and I think that far too many people overlook one of the most frequent tasks in their daily lives.

Get a good keyboard. Consider a new layout. It doesn't take that much time or tech-savvy. I'd say about 2 weeks of losses, and 1-3 months of improvements to reach your previous level, as long as you are serious about the switch.

This brings me to why I've started this blog. Recently, I reprogrammed my ErgoDox from the Massdrop Configurator's default firmware to the TMK Firmware, which introduced a lot of cool features. I've also started learning Vim bindings and looking at Plover, an open-source stenography program.